Welcome to another edition of Manic Monday, where I recap the previous week and lay out a plan for the upcoming week.

Monday (Scheduled Cross-Training Day)
Walked to and from work (~4.4 miles), and did 16 squats and 17 push ups using the Runtastic apps.  I also did some clam shells and leg lifts for my hips.

Tuesday (Scheduled Speed Work)
I got up before work and did some modified fartleks.  Basically, I ran down to the waterfront for a warm up (~1 mile), and found a flat stretch where I could sprint an unknown distance (100m? 200m? who knows), then jog back and repeat.  I did this 4 times, and I DEFINITELY gave it too much gas during the sprints.  I actually had to walk up part of the hill on the way home because I was so spent.  I’m gonna blame it on donating blood last week.  I also walked to and from work (~4.4 miles). 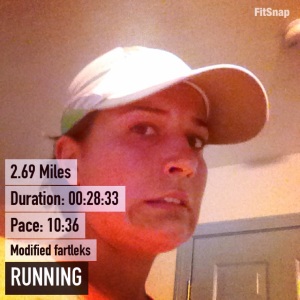 Wednesday (Scheduled Cross-Training Day)
I walked to and from work (~4.4 miles).  After work, I did a 30 minute Yoga for Runners video I found on youtube.  I’ve been feeling really stressed and overwhelmed lately, and after Lauren’s post last week on why she practices yoga, I knew I needed some yoga in my life, stat.  It’s been almost a year since I did anything other than a few asanas on my own, and it felt WONDERFUL!  It wasn’t the best sequence ever, but it was still awesome to practice again.  I’ve decided that from now on, Wednesdays are yoga days.  My gym usually has a class on Wednesday nights, but if I can’t make it to class, I’ll find a youtube video.

Thursday (Scheduled 4 miles easy)
I wasn’t able to get myself up before work, so I headed out along the bike path after work.  I wasn’t really feeling it, and the waterfront was super crowded, but I got it done, and spent a decent amount of time stretching after.  I also walked to and from work (~4.4 miles). 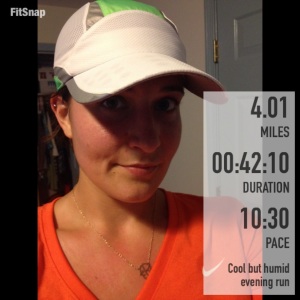 Friday (Scheduled Rest Day)
Other than walking to and from work (~4.4 miles), this was a total rest day.  We drove over to Maine to stay with Ben’s Grammy for the weekend before the wedding.

Saturday (Scheduled 7 miles LSD)
I’d like to say I got my long run in, but that would be a lie.  We were exhausted, so we slept in till 10.  By the time “brunch” was over (bacon, eggs, toast and a beer at noon), I knew I wasn’t going to make it out for 7 miles.  We swam, we read, and before dinner I went out for a few miles around Little Ossippee Lake.  It was extremely humid, because a big rain storm had just blown through, and considering what I’d been eating and drinking, I was pleasantly surprised by my 3.5 miles. 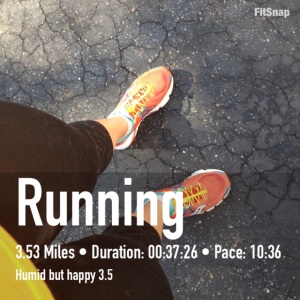 Sunday (Scheduled Rest Day)
We slept in again since we stayed up late playing cards with Grammy (she wins EVERY TIME!).  Around 2 we headed over to Portland to meet up with some friends for a drink before the wedding.  The wedding was really nice–the actual chuppah and ceremony were held outside at a park right across the street from the shul, and it was a perfect day.  The food was great (hello, dilly beans!), and my friends were obviously just so excited to finally be married.  Unfortunately, we had to leave early to head back home to VT, so I don’t know if they did the horah (chair dance) or not.  Sadface.

This week:
This is week 1 of my official training plan for half marathon number two!  I’ll be posting my schedule in more detail later this week.  For now, my goals are to keep to the training plan as much as possible, and be sure to fit in yoga at least once.

Did you travel this weekend?