I may be doing an OK job of hiding it here on the ol’ blog, but in reality, I’ve been pretty pissy about this whole hurt-foot-not-running thing.  Like, full on, weepy, angry, taking it out on everyone for no reason pity party.  I haven’t really been working out at all, even though the bike and weight training are totally OK, and I’ve been playing video games for more hours than is strictly healthy.

In some respects, this is totally natural.  I’m dealing with disappointment in my own way, trying to work through it and figure out how to approach my first real running injury.  It’s been a frustrating process, especially because after a doctor visit and x-rays, I still don’t have a diagnosis, so I’ve been kind of playing the waiting game to see if things get better on their own.

This weekend, as I cruised through my 8 millionth consecutive hour playing Skyrim, I decided that enough is enough.  Yes, being injured and not being able to run sucks.  Not having a concrete diagnosis and treatment plan sucks.  But I can either continue to be a whiny, lazy mess, or I can just move on with my life and find other forms of exercise that, while not as awesome as running, will at least keep me from losing all of my muscle and cardiovascular endurance while my foot heals.  It’s my choice how I let this affect me, and up until now I’ve been making the easy choice of being sad and angry and lazy instead of productive.

So effective today, I’m cancelling the pity party.  I’m ready to commit to finding fitness wherever I can until my foot gets better, and I’m working on an attitude adjustment.  I’ve got my gym bag all packed, and I’ve got gym time scheduled for at least three days this week, not including all the dancing I’ll be doing at my Legally Blonde audition tomorrow (yes, there’s a Legally Blonde musical, and it’s awesome). 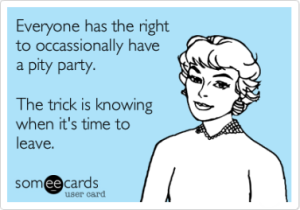 And to finish up, I’ve got some good news:  I got some cheapo Dr. Scholl’s arch support inserts to wear in my normal shoes, and my foot hasn’t hurt at all in two whole days!!!  Obviously, I realize this doesn’t mean I’m cured and it’s time to start running again, but it’s encouraging.  I haven’t run in exactly 4 weeks, so I’m going to try to wait another 2 to make it a full 6 weeks of rest, before very slowly and carefully adding in some running.

Have you ever tried over-the-counter shoe inserts?  How did they work out for you?

23 thoughts on “Cancel the Pity Party”