As you all know, I’m currently on a comeback after 6 weeks off from running due to a foot injury.  Things are going well.  I’ve run a few times each week since Christmas, keeping the mileage and intensity low, and my foot feels great.

Everything else?  Not so great.  On Monday, I was at the gym going for 3 miles on the treadmill.  After my warm up, I cranked the pace up to what would have been an “easy” run for me 3 months ago.  Ya’ll, it was HARD!  I was huffing and puffing, sweating like a pig, and by the time I finished (which, by the way, took EVERYTHING I HAD), I was the color of a plum.  I’m embarrassed by how red I was.

It’s crazy how quickly your body loses fitness when you take time off.  I know it was incredibly delusional of me to think that I could just go back to running fast-for-me miles on my short runs after so much time off, but it’s still a bummer to be faced with the reality that I’m not as fit or fast as I was.

That being said, I’m not discouraged.  If anything, I’m motivated to work even harder to get back to where I was, because I miss it.  And even though my run on Monday was hard, it felt GOOD.  I could feel the endorphins rising as I plugged away, and I was SO PROUD that I pushed through, in spite of the sweat and my stupid lobster face.  I could feel something deep inside me saying “YES. THIS. I MISSED THIS.” 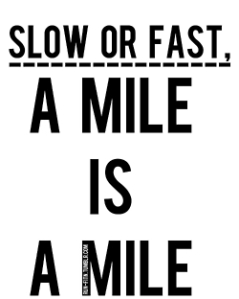 I’m trying to take things one run at a time, one mile at a time.  It will get easier.  I will get faster.  And at least I’m running.

Do you find you lose fitness/speed quickly when taking a break from running?

Do you turn beet red when exercising too?