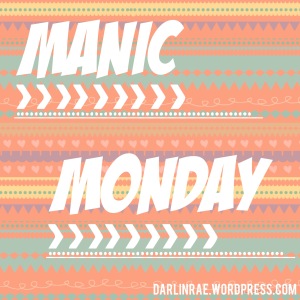 This week was heavy on running and light on cross-training. While that’s definitely ok once in a while, I don’t want that to become the norm. I really love my CXWORX and Body Pump when I can get there, and I want to continue to build my strength for injury prevention.

Monday 02/23/15:  Ran 3 miles on the treadmill and stretched, then lots of jumping rope and dancing at rehearsal

Thursday 02/26/15:  Rest day. Normally I would have gone to CXWORX, but we had a pizza and beer date with some friends instead 🙂

Friday 02/27/15:  Unscheduled rest day. I intended to run, but realized I forgot my sneakers, boo. I actually considered going to Fleet Feet and buying sneakers since I need a new pair to rotate in anyway, but I just can’t justify the purchase right now, so I just relaxed until rehearsal.

Saturday 02/28/15:  “Rest” day. I got to ride the Legally Blonde float in the Mardi Gras parade, and spent  some time running around helping to construct the float beforehand, walking around before and after, and throwing beads to the crowd. I also parked my car many, many blocks from the after party, and had to walk there to get home. 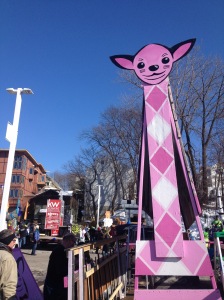 The float as seen from the back. 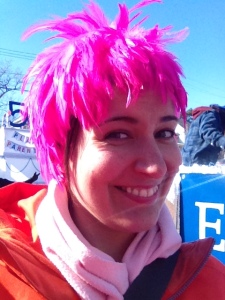 Sunday 02/29/15:  First rehearsal at the Flynn theater! I wish I’d taken some pictures, because this theater is beautiful. Fully restored art-deco. It’s great. We rehearsed all of the big dance numbers, including the jump rope number, so I got in several hours of dance and jumping rope.

I’m feeling REALLY worn down today. People at work and in the cast have been getting sick left and right, and I feel like it’s only a matter of time until I succumb. I’m trying to hydrate like crazy and eat well, but I just need more sleep, and that’s hard to come by right now.

The good news is, I have a 4-day work week and a 3-day weekend to look forward to. Ben’s cousin Scott is getting married this weekend, so we’re headed over to Ithaca for the festivities. Other than the wedding on Saturday, we don’t have much to do other than drive, so I’m hoping to catch some car naps and rest up.

Does your town/city celebrate Mardi Gras?

Have you ever gotten to ride a float in a parade?

Ben took Vera to his parents’ house for the morning, and rather than cleaning my messy-ass living room, I snuck in a couple of prenatal workout videos. Core and arms done. Now it’s time to shower and get cracking on last-minute Christmas crafting. #bodyfitbyamy #prenatalfitness #23weekspregnant
*LONG POST ALERT* Oh, hey, hi there. Yeah, I haven’t been around in a while. The very short of a very long story is that I’m still injured, and I don’t have a diagnosis because... I’m pregnant with baby #2. While this is an intentional pregnancy and my husband and I are thrilled, not being able to get an x-ray and figure out what’s going on with my foot has been a big bummer. I haven’t run in months, and barely walk at all other than daily getting around. I also spent the entire first trimester sick as a dog 24 hours a day, so I haven’t exactly been having a healthy, active pregnancy. The good news is, I’m finally starting to feel better and have more energy, so I’ve been slowly getting back in the swing of things with at-home prenatal workouts (thank you, YouTube!). While running is my first and truest fitness love, now is just not the time for it, and that’s ok. It will be there and waiting when I’m ready. • #injuredrunner #motherrunner
Wallowing in “woe is me” today. In this next installment of #injuredrunner saga, it turns out there are only TWO podiatrists in my area, and both of them aren’t booking new patients until OCTOBER. So I’ll be taking the X-ray order my GP gave me as a “just in case” and heading to the hospital tomorrow to at least get imaging done. In the meantime, I’m on the couch drinking a beer in my underwear.
Injury update: still no call from podiatry (it’s been a full week since I saw my PCP). Called insurance today, and it turns out I don’t even NEED a specialist referral 🤬 I am about to call the hospital’s podiatry department and if I can’t get an appointment next week I’m just gonna go use the x-ray order my PCP gave me and see what she can make of it. Ugh. #injuredrunner
Another day and nothing from podiatry. I called my GP’s office to check in and was told that their referrals department was “way behind on work,” and that I wouldn’t hear from anyone until it went through. And no one knows when that will be 😡 My GP did give me an X-ray order in case it took a while to get into podiatry, but I kinda wanna see the specialist, ya know? Ugh. Planning to give it another couple of days before I go rogue. In the meantime, another family walk today. #injuredrunner
I went to the doc on Tuesday. She referred me to podiatry, who is supposed to call and schedule me in. Haven’t heard from them yet 😡 If I don’t hear from them today, I’m planning to call my doc’s office and get the number so I can call myself. Absent a diagnosis, I can’t sit still. Ben, Vera, and I went for a 2ish mile walk today. Still have pain, but it’s less when I’m wearing shoes versus barefoot 🤷🏻‍♀️#injuredrunner