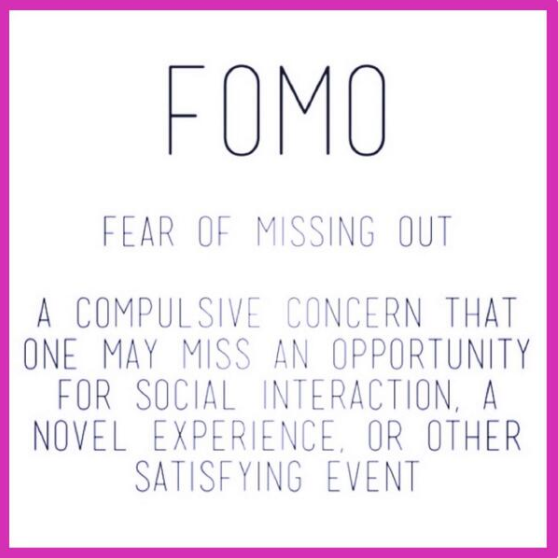 I don’t suffer too much from FOMO as far as social events go. I’m a bit of an introvert, and usually I’m pretty happy to just be hanging out at home with my cats and my husband. I’m generally happy when plans fall through or people bail, because it means I don’t have to put on pants and a bra and leave the house.

The only things I get true FOMO about are shows. Namely, shows that I want to audition for but somehow don’t work with my schedule, or could have auditioned for and didn’t and now I’m missing out on the experience. This FOMO is what has led to me doing two shows back-to-back on numerous occasions, even when I was exhausted and it probably would have been better to just take a season off.

As I contemplate our (hopefully) impending pregnancy, I’m ALREADY obsessing over the shows and theatre opportunities I might miss. For instance, Lyric Theatre Company’s fall show A Christmas Story the Musical is auditioning right now. The music is by Pasek and Paul, of Dear Evan Hansen and Dogfight fame. There’s a GREAT part for me. And the rumor mill is suggesting that audition turnout hasn’t been that great, meaning that I stand a very strong chance of getting the part I want. SO TEMPTING. Obviously I’m not auditioning because hello I need a break. But this is just the tip of the iceberg.

What if a local company does a show I really, really love while I’m 6 months pregnant, or I’ve got an infant child dependent on breast milk? I live in a relatively small city in a small state and some opportunities literally only come up once in a lifetime. I only have so many years left where it’s feasible for me to be cast in RENT, or The Last Five Years. Dogfight is a perfect example–it was the first time the show had ever been performed in Vermont, and due to the fact that it’s a small, not well-known show that never made it to Broadway, it might be YEARS before it’s produced in the area again, if ever, at which point, I will be too old to play Rose. I got lucky on this one.

I just can’t seem to shut off the nagging voice in my head that’s telling me to run out RIGHT NOW and audition for anything and everything I can until I’m too pregnant to pass as non-pregnant. I’m exhausted and burned out and have SO MUCH TO DO but I can’t help but think “What if I don’t get to do another show for a year? Two years? THREE YEARS?” I play mind games with myself, like, “You might not even get pregnant the first month. Or second. Or third. You could totally do a show this fall.” Which is INSANE! Cause if I do get pregnant right away, I’d be working a full time job AND rehearsing 15+ hours a week during my first trimester. That sounds terrible. But then, that devil’s advocate again. “If you don’t get pregnant by January, you can TOTALLY audition for the spring show.” I can’t stop.

Obviously, starting a family is my priority, and once you have a child/children, you’re simply going to miss some things. That’s how it goes. I get it. I’m sure once I have my own actual child, I will be a lot less worried about FOMO and more worried about keeping said child clean and fed and happy than “Oh, man, I could be rehearsing 20 hours a week right now.” I firmly believe that having children won’t preclude me from pursuing my passions. I have a loving, supportive husband who wants me to do what makes me happy. We are a team, so it’s not like I have to worry about, “Oh, well Ben can’t handle the kids without me.” That’s silly. It will just take some time to adjust to life with children. And I truly can’t wait. I just need to tell the FOMO to kindly shut the hell up.

Do you ever suffer from Fear of Missing Out? How do you handle it?

5 thoughts on “The FOMO is Real”