Hi friends! Sorry for the delay, but I’ve been pretty busy at work since we got back from Toronto. Despite some planning SNAFUs, we had an absolute blast. Away we go with the trip recap!

Friday
We got on the road right around 9 am, which allowed a relatively leisurely morning at home. We took Route 11 across the top of New York and crossed into Ontario at Cornwall. The stop at the border was super quick, and then we were headed west on Route 401. 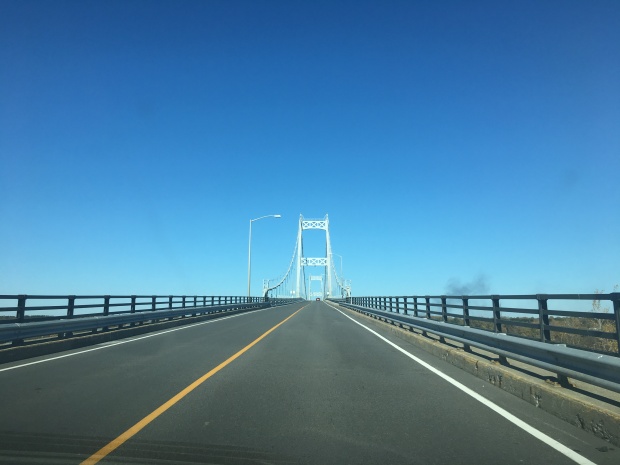 Unfortunately, we hit INSANE rush hour traffic right on the outskirts of Toronto, and I succumbed to some pretty intense runger. Once we finally got into town, we realized that our hotel didn’t have a dedicated parking garage. Seriously? That sucked. But we found a garage on the same street as our hotel that would charge us $22 for the whole weekend, which turned out to be a deal considering that the hotel offered valet service for FIFTY FREAKING DOLLARS A NIGHT! Woof.

After we got checked in, we were exhausted and ravenous, so we set off to find some food. Within a two block stroll, we happened upon Aroma Indian restaurant. The place was super busy, but we got a table very quickly. After some pakoras and samosas, we were less starved. For our mains, I got Chicken Tikka Masala and Ben got a lamb dish. Scrumptious!

After dinner, we just strolled around the city for a while. Our hotel, the Residence Inn, is right smack bang in the middle of the downtown entertainment district, mere blocks from the Rogers Centre (where the Blue Jays play), and the CN tower. It was so beautiful all lit up at night. Tiredness got the better of us pretty quickly, and we headed up to our room to watch TV for a few minutes before bed. Cable TV is a huge luxury for us!

Saturday
We were up and at ’em early on Saturday morning, as we wanted to cram in a lot of sightseeing. We hit up our hotel’s free breakfast to save a few bucks, and while sitting at our table, I saw on the news a brief blurb about the Toronto Waterfront Marathon. Which would be happening the following day. Ummmm, what? A little research revealed that the marathon course literally circled our hotel, and there were road closures scheduled all morning on Sunday.

With this information, we determined that our best bet would be to leave extra early on Sunday morning, otherwise we’d likely be trapped in the city for who knew how long. With a 7+ hour drive, we didn’t want to leave super late in the day. Armed with a plan and the knowledge that we wouldn’t have any time for fun in the city on Sunday, we headed out, determined to have ALL THE FUN on Saturday.

First stop was the Kensington Market, a cool neighborhood of funky shops and restaurants. Sadly, it was too early in the day for most of the places to be open, but it was still pretty and interesting.

Next up was the CN Tower. This was a bit expensive ($60ish bucks US dollars), but well worth it. The views from the observation area were incredible. There was also a glass floor, which made me feel all kinds of wobbly. I had to work up my courage to stand there long enough for a picture! 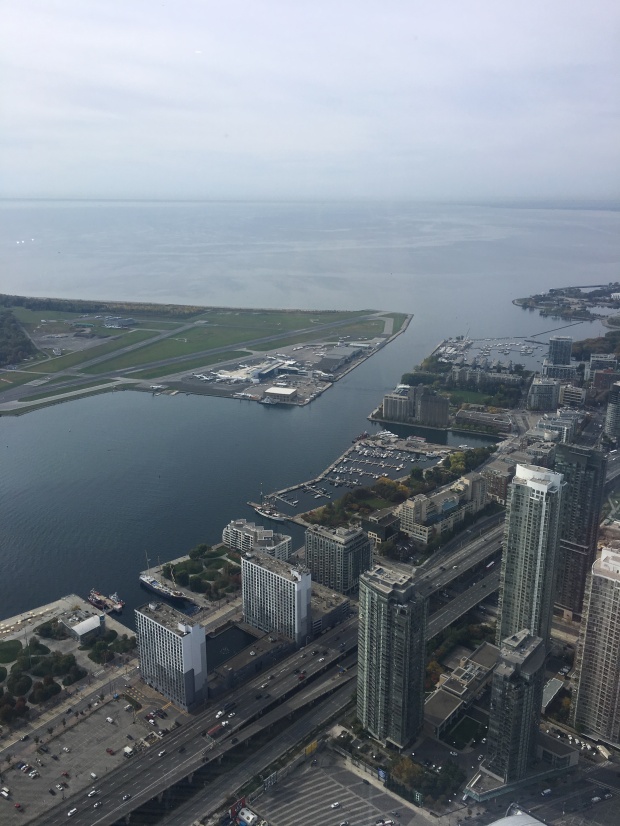 Since the Canadian Railway Museum was close by, we headed there next. It’s such a cool place–basically it’s the old roundhouse yard, just preserved in the middle of the city. The turntable and all the original tracks are still there, and there are a bunch of locomotives, train cars, and cabooses set all around so you can look at them and take pictures. You can even climb inside the caboose and look around! The “museum” portion was pretty lame, but with an admission fee of just $5 CAD, I just looked at it as a donation to help preserve the cool stuff outside. 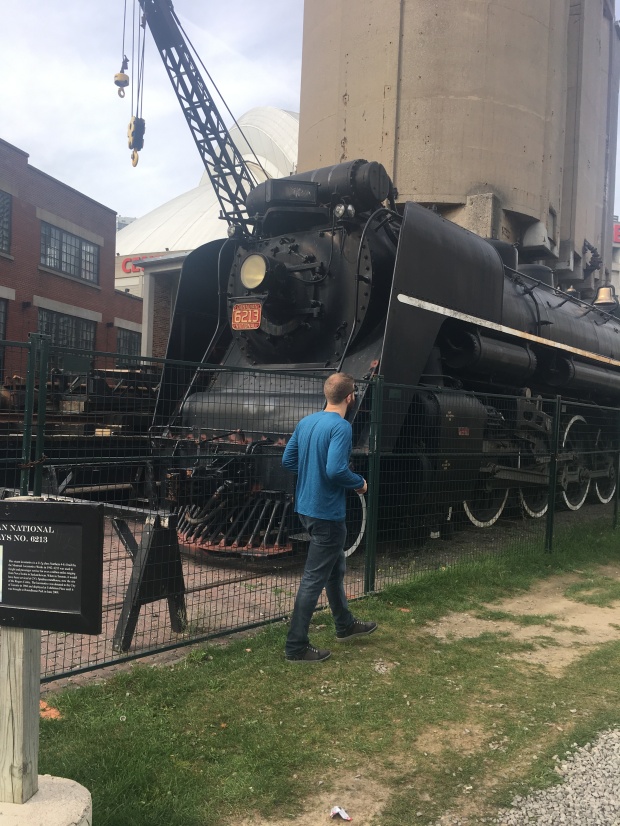 It was nearing lunch time and I was starting to get hangry, but Ben wanted to check out a sailboat that he had seen on the drive in the night before, so we walked down to the waterfront. After investigating the boat (it wasn’t a wooden ship, and it was closed to the public), we found ourselves at the Amsterdam Brewing Company for lunch. 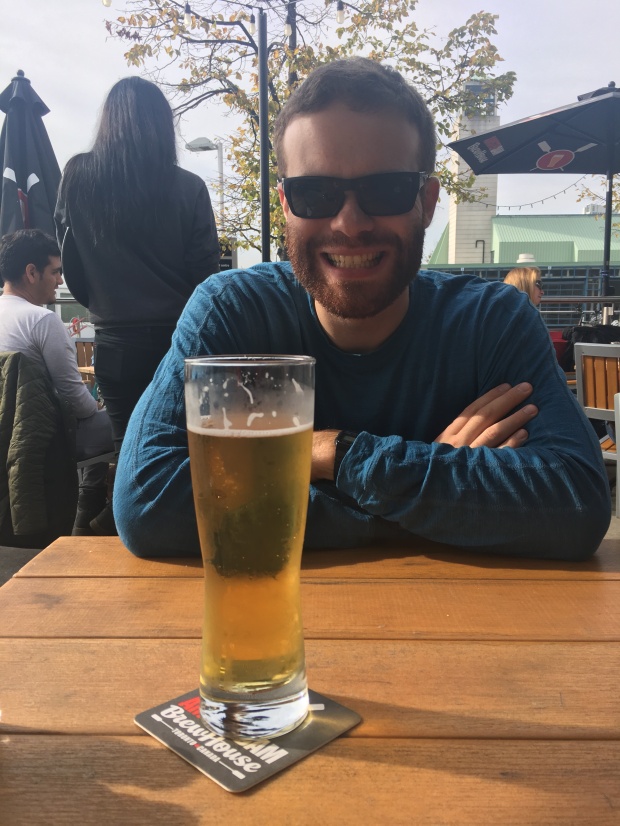 This was a GREAT spot. We got a table on the patio, so we could not only see boats coming in and out of the harbor, we could see planes taking off and landing at the airport, which, fun fact, is ON AN ISLAND. Yeah. Pretty awesome. We sat for almost 2 hours enjoying lunch and some microbrews before we were ready to head off to our next destination.

The St. Lawrence Market was kind of a haul, but we had trouble figuring out Metro tickets, so we just sucked it up and walked. St. Lawrence Market is an indoor market kind of like Quincy Market in Boston. Tons of cheeses, meats, bakeries, fresh fish, and vendors. It was very crowded and kind of overwhelming, but we managed to do a bit of Christmas shopping. Hooray for being ahead of the game!

By this point, we were both pretty tired, and headed back to the hotel for a nap. We had hoped to hit Fort York, but we were just too pooped. After a couple of hours laying low at the hotel, we were ready for round two. We decided to head toward Fort York even though it would probably be closed. It was. But we could still see most of the historic buildings from the street, so that was cool.

We then started a big circle back toward the hotel in search of some food. I was once again hangry (damn me and forgetting to pack travel snacks), and was quite a surly wench. There were innumerable food choices–Mexican, Greek, Vietnamese, pizza, Thai, sushi… I was just so hungry I couldn’t make any decisions. Finally, we ended up in front of Touehenboku Ramen, and I huffed and said “Fine, I guess Ramen is fine.” GUYS. Ramen is DELICIOUS. Savory and oh-so-satisfying without leaving you feeling like a glutton. We had some pork dumplings, then I had a garlicky Ramen with chicken and I ate every last bit. OMNOMNOM.

After dinner, we decided to just head back to the hotel and enjoy some more cable TV, haha. We were wiped out from a long day of walking, and knew we had an early wake-up call for Sunday. Lying in a king sized bed watching cable TV with air conditioning is the height of luxury, I tell you.

Sunday
Our alarms went off at the ungodly hour of 5:30 am, and we were checked out of the hotel and in our car by 6 am. I know, I’m impressed too. We stopped at a rest area around 7 to grab breakfast at Tim Horton’s, because, well, “When in Canada,” right?

After another hour or so of driving, we were both struggling to stay awake, so we pulled over at another rest area and napped for about an hour. MUCH BETTER. It was a long drive home, but we pulled into the driveway right around 3 pm, which left us plenty of time to unpack, do laundry, and chat with Ben’s parents. And then, no joke, we went to bed at 8:30 pm. Party. Animals.

All in all, it was a great trip, I just wish we’d known about the marathon before booking this particular weekend. I also wish we’d left earlier on Friday so we hadn’t hit rush hour traffic. Lesson learned for next time! Toronto has a ton of diversity, great food, and so much to see and do. I know Ben and I are both anxious to go back and explore more of the city.

Have you ever been to Toronto? What was your favorite thing you saw/did?

Ben took Vera to his parents’ house for the morning, and rather than cleaning my messy-ass living room, I snuck in a couple of prenatal workout videos. Core and arms done. Now it’s time to shower and get cracking on last-minute Christmas crafting. #bodyfitbyamy #prenatalfitness #23weekspregnant
*LONG POST ALERT* Oh, hey, hi there. Yeah, I haven’t been around in a while. The very short of a very long story is that I’m still injured, and I don’t have a diagnosis because... I’m pregnant with baby #2. While this is an intentional pregnancy and my husband and I are thrilled, not being able to get an x-ray and figure out what’s going on with my foot has been a big bummer. I haven’t run in months, and barely walk at all other than daily getting around. I also spent the entire first trimester sick as a dog 24 hours a day, so I haven’t exactly been having a healthy, active pregnancy. The good news is, I’m finally starting to feel better and have more energy, so I’ve been slowly getting back in the swing of things with at-home prenatal workouts (thank you, YouTube!). While running is my first and truest fitness love, now is just not the time for it, and that’s ok. It will be there and waiting when I’m ready. • #injuredrunner #motherrunner
Wallowing in “woe is me” today. In this next installment of #injuredrunner saga, it turns out there are only TWO podiatrists in my area, and both of them aren’t booking new patients until OCTOBER. So I’ll be taking the X-ray order my GP gave me as a “just in case” and heading to the hospital tomorrow to at least get imaging done. In the meantime, I’m on the couch drinking a beer in my underwear.
Injury update: still no call from podiatry (it’s been a full week since I saw my PCP). Called insurance today, and it turns out I don’t even NEED a specialist referral 🤬 I am about to call the hospital’s podiatry department and if I can’t get an appointment next week I’m just gonna go use the x-ray order my PCP gave me and see what she can make of it. Ugh. #injuredrunner
Another day and nothing from podiatry. I called my GP’s office to check in and was told that their referrals department was “way behind on work,” and that I wouldn’t hear from anyone until it went through. And no one knows when that will be 😡 My GP did give me an X-ray order in case it took a while to get into podiatry, but I kinda wanna see the specialist, ya know? Ugh. Planning to give it another couple of days before I go rogue. In the meantime, another family walk today. #injuredrunner
I went to the doc on Tuesday. She referred me to podiatry, who is supposed to call and schedule me in. Haven’t heard from them yet 😡 If I don’t hear from them today, I’m planning to call my doc’s office and get the number so I can call myself. Absent a diagnosis, I can’t sit still. Ben, Vera, and I went for a 2ish mile walk today. Still have pain, but it’s less when I’m wearing shoes versus barefoot 🤷🏻‍♀️#injuredrunner