Happy Monday, friends! Just like that, another weekend has gone by. They all seem too short, but this one was ACTUALLY too short due to the beginning of Daylight Saving Time. I’d really like that hour back this morning…

Friday
I ran a few errands on the way home, and then had another Friday night of leftovers for dinner and relaxing with a mud mask while Ben ran around at broom ball. Delightful. 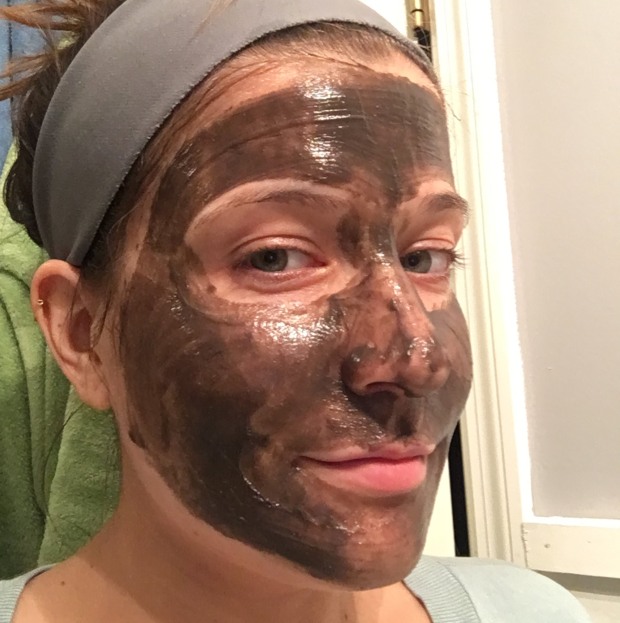 Saturday
Saturdays seem to be our productivity days. After breakfast, we meal planned out the week, then headed off to the dump, then grocery shopped. We were planning to have Ben’s Grammy over to see the house, but our errands took longer than expected, so while Ben headed out to pick up Grammy, I did a frantic all over house clean: vacuumed, swept, did dishes, picked up clutter, put laundry away, and generally busted my pregnant ass.

Just as I was making the bed and hurriedly shoving stuff into our closet around 3, they arrived, so we settled down to chat and eat some snacks. I think Grammy was happy to get out of what we jokingly refer to as “Grammy Jail,” and we had a nice little visit.

Around 4:30, Ben took Grammy home, and I took a shower and laid down in bed for a while. The flurry of errands and cleaning really took it out of me and I was pretty tired. We were expecting Ben’s parents and sister Emily for dinner, so I needed to chill out for a bit.

Ben got home around 5:30 to take his shower, and then his family arrived shortly after with a grill in tow. Ben’s dad BBQ’d some chicken, and I roasted some potatoes and made a salad to go with. We chatted, ate, and hung out until around 10, when I started to have some *ahem* digestive issues. Let’s just say that pregnancy is hell on your insides, and leave it at that. My in-laws left shortly after I went to bed, but Emily ended up staying over night, and she and Ben were up conversing and drinking beer until the wee hours.

Sunday
As a result of the late night and the time change (eff you, Daylight Saving Time), we all slept in pretty late. I was still enjoying a relaxed “brunch” of coffee and a homemade breakfast burrito when Emily headed out around 11. Right around noon, Ben left to go snowboarding, and I was left to my own devices for the day.

After such a hectic day on Saturday, I was really craving a slower pace. I did a few productive things, such as firing up the crockpot for dinner and hanging a few pictures, but most of my day looked like this:

I was really focused on just taking it easy. I’ve finally reached the stage of pregnancy where I FEEL pregnant all the time. My body is different, heavier and more tired and needing more rest, and rather than resisting and trying to just push through and DO ALL THE THINGS, I’m trying to chill the eff out. It’s hard, but I’m getting better at it.

Ben got home from the mountain around 6 and we enjoyed a dinner of crockpot teriyaki pork chops with brown rice, then I resumed reading while he popped on a WWII documentary (nerd), and we went to bed at 9:30, which was just what we both needed.

And now it’s Monday and I am desperately wishing I were still on my couch reading. But c’est la vi.

When’s the last time you took a total relaxation day?