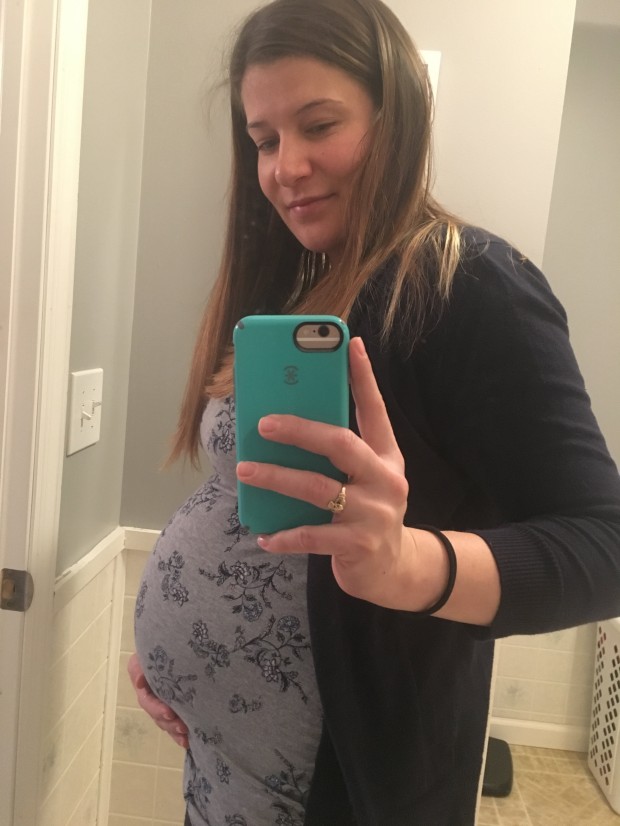 According to my Ovia Pregnancy app, Baby Girl is the size of a cantaloupe.

I just have to laugh at the WILDLY inconsistent sizing this app uses. Last week she was a pineapple, and most pineapples I’ve seen are larger than most cantaloupes I’ve seen. Every week Ben and I have a giggle at the expense of the app-makers who picked these food comparisons…

Anyway, in approximately 10 weeks we get to meet our baby girl. Holy crap! The crazy thing is, it could be even less time, if she decides to make her grand entrance early. I know the conventional wisdom is that first-time moms usually go long, but that’s not a hard and fast rule. I’m hoping Baby Girl decides to stay inside and bake for the full 40 weeks, but who knows?

Various apps suggest that our little girl is still between 15-17 inches tall and between 3-4 pounds. She’s still mostly just working on gaining body fat, and also developing eyesight. As she gets more body fat to keep her warm, she’ll start to shed the lanugo (fine downy hair) currently covering her entire body.

We had yet another prenatal appointment this week. Every two weeks seems to happen very quickly! This was a very “business as usual” visit, although I’m starting to ask a lot of the questions I have regarding what D-Day is actually going to be like: standard operating procedures, who will/won’t be in the delivery room, etc. I have a MILLION questions, but I know a lot of them will be answered in our upcoming childbirth education classes, so I’m trying to just ask a few key questions at each appointment. We also got our preregistration paperwork and the paperwork to get Baby Girl’s social security card and birth certificate. Shit’s getting real!

Symptoms are more of the same. General fatigue, tight, itchy skin, and difficulty sleeping due to hip pain. It actually got so bad a few times this week that I was limping. I finally caved and made a chiropractor appointment for next week. Dr. Shelley Crombach came highly recommended by my friend Aimee, and my midwife also went to her for her pregnancies, so I’m really hoping she’ll be able to reduce the pain I’m experiencing in my right hip and help me get some decent sleep.

A coworker gave me two big bags of maternity clothes this week, and I actually made out like a bandit. Two t-shirts, two tanks, a three-quarter sleeve top, a sweater, a bra, and a pair of jeans! All free! Woot! Even though I’ve now gone maternity shopping twice, I still didn’t have very much variety, and was starting to feel frustrated by my lack of options. I’m hoping that I can now cruise through the remaining 10 weeks without any additional purchases.

On Sunday I did a big clean/organize in the baby’s room, washing and putting away most of the clothing we have, shifting furniture, and putting large, unopened items in the basement until they are needed (car seat, pack ‘n’ play etc). We’ve still got lots of burp cloths, blankets, and other miscellany to wash and put away, but it’s starting to look pretty decent in there. I wish I’d taken before and after photos, because it was a real train wreck.

We’re also working on selecting a pediatrician, which feels like such a big deal. I know it’s not, really, because if we end up not liking our first pick we can just go elsewhere, but I still feel a lot of pressure. We’ve narrowed it down to one office that came highly recommended by friends, so now we just need to pick the actual doctor. Once we get that sorted out, I’m going to be feeling pretty good about where we are in terms of overall readiness.

According to my Ovia Pregnancy app, Baby Girl is the size of a head of Romaine lettuce

Week 31 was a banner week! Ben and I were on vacation, spring came for a visit, and we got a lot of shit done.

On the homeownership front, we did a lot of outdoor maintenance. Ben took down a sick old fir tree in front of the house, while I trimmed a bunch of dead branches off the other fir and pine trees in the front yard. We also bought yet more stuff for the house, like a hose, a wheel barrow, and supplies to string a clothesline from the front porch to the fir tree stump. We’re planning to cloth diaper Baby Girl, and line-drying is highly recommended for the bleaching and bacteria-killing effects.

We also took lots of long walks on the rail trail. My ligament pain has finally gone away, but the pain in my right hip has become an all the time thing now instead of just a nighttime thing, so walking remains pretty uncomfortable. I started seeing a chiropractor this week and after a few adjustments, things are feeling better, but still not 100%. My doc is confident that continued adjustments will get me back to normal, though, so fingers crossed!

A new symptom that popped up this week is mild swelling in my fingers and feet. Thankfully, it’s hardly noticeable unless I’m trying to get my rings off. And I don’t have cankles yet, so I’m happy. Otherwise, it’s just more of the same third trimester symptoms I’ve had the last few weeks.

Baby Girl isn’t really doing much development other than putting on weight at this point. She’s very active in my belly, with lots of big pushes and swipes rather than little kicks, and we’ve had several more bouts of hiccups, which are still hilarious and adorable.

The baby shower is this coming weekend, so I’m hoping that we’ll get the last few big-ticket items like a stroller and cloth diapering supplies that will help us put the finishing touches on the baby’s room. And if not, that’s where Amazon Prime comes in, haha! Now that we’re into the 30’s on weeks, things seem a lot more real. We start childbirth education classes soon, and in a few weeks I start seeing my midwives every week. Aaahhh! I need to get cracking on that hospital bag, too.

Parents, when did you get that “Oh shit, this is REAL” feeling?