I had a random spike in page views on Wednesday. Usually I get anywhere from 40-70 page views per day depending on what I post, but I had 145 on Wednesday! I’m way too techno challenged to figure out what to attribute the spike to, but it may have something to do with the fact that the lovely ladies of The Fairest Run of All included me in their weekly roundup. Thanks, ladies!

My BibRave Pro ambassador kit arrived this week. I got a really nice Asics core singlet with the BibRave logo, a Bibrave

koozie, and some temporary tattoos. If I had any doubt at all that I was going to love being a BibRave Pro, it was completely washed away when I realized that their signature color is orange. Hello, MY signature color is orange! Match made in heaven. I wore the singlet for a 4 miler on Wednesday, and it’s perfect. Lightweight, comfortable, doesn’t ride up over my tummy, and minimal chafing (which can be mitigated with Body Glide).

We’re getting a heat wave next week! And by that, I mean than the high temps are above freezing–high 30’s and low 40’s for most of the week, Hallelujah! That in combination with daylight savings time starting this weekend means OUTDOOR RUNNING NEXT WEEK YAAAAAY!!!

I’m not at work today, wheee! Ben, his parents and I are off to a family wedding in Ithaca, NY. We’ll be staying with Aunt Amy and Uncle Harry in their gorgeous old farmhouse, with a full complement of cousins. It should be a blast. I’m also grateful to have a 3 day weekend, and 3 full days off from rehearsal. I’m exhausted!

Have you ever had a random spike in blog hits? What do you attribute it to?

Do you use BibRave to find and write race reviews?

When is the last time you ran outside?

Unfortunately, things didn’t work out with my Asics Gel-Kayano 20s.  While they felt extremely comfortable walking around and doing quick jogs around the store, if I ran in them more than 10 minutes, they caused my feet to go numb.  Like, weird, tingling, I-can’t-wait-to-stop-running numb.  At first, I thought it was just an adjustment period, since I’d been running in much less supportive shoes for so long and my feet weren’t used to the extra cushion.  But after two runs that I had to cut short just because my feet felt so weird, I decided they weren’t worth my time.  Spending $160 on shoes that I can’t run in is absolutely absurd.  That’ll teach me to be so gushy before actually testing them out!

Thankfully, Fleet Feet has a great customer satisfaction policy–there’s a sign right up by the cash register that says “The sale is complete when you are satisfied.”  I called the store and explained my issue, and even though I’d worn the shoes outside, they took them back, no hassle.  I seriously can’t recommend Fleet Feet enough.   If you have one near you, definitely give them a try!

After talking with sales associate Chris, we decided that a more middle-of-the-road shoe was probably best, since going from total minimalist shoes to super support shoes was probably the main issue.  I settled on the Saucony Mirages.  They definitely have more support than my Nike Frees, but they don’t feel like they’re suffocating my feet like the Asics did.  I also ended up with shoes a 1/2 size larger than normal to allow for spreading and swelling.  Fingers crossed these work out better!

The best part is, the Sauconys were so much less expensive than the Asics that I got these Nike shorts for free (yes, I know that’s now how it actually works but that’s how it works in my head!).  They’re really comfy, flattering, and lightweight–I can’t wait to try them out!

Also, Darlene of My First 5k and More has nominated me for another Liebster Award!  Thank you so much Darlene!  Everyone please pop over and say hello.

Since I’ve already done one round of nominations for my previous Liebster, I won’t send it around again.  I don’t want people to get tired of the Liebster since it’s really such a nice idea.  I also think that pretty much everyone I follow has been nominated at least once, so I’m just going to let it rest.  And while some of you may have a burning desire to learn more random junk about me, my guess is that most of you don’t care to read through another batch of answers, so I’ll hold off on that as well.  Congratulations to everyone who has been nominated!  It’s been really fun getting to know you all better!

Have you ever gotten a new pair of running shoes you were really excited about, only to have them turn out to be totally wrong for you?

Look at them.  Just look.  Take in their splendor.  They’re pink and orange.  They’re perfect.  And they’re mine!

I went to my local Fleet Feet store last night.  I’d never been and was really looking forward to it.  The sales associate who helped me was awesome.  She measured my feet while sitting and while standing, and watched me walk barefoot around the store.  She determined that I over-pronate and needed a stability shoe.  Now, this is hilarious and awful, because I’ve been using Nike Frees for the last year and a half, which are pretty much the opposite of a stability shoe, and probably explains my foot and hip pain.

First, she brought out a pair of Sauconys and a pair of Nikes.  The Sauconys were pretty nice, but I had major heel slippage with the Nikes (also they looked like old lady shoes).  Next she brought out some Brooks Ravennas, which were similar to the Sauconys and very pretty.  And then she brought out my new loves, the Asics Gel Kayano 20s.  I feel like I’m running on fluffy clouds and kitten cuddles.  They’re like a hug for my feet.  No foot pain.  No knee pain.  No hip pain.

She originally brought out a blue and purple pair, and on a whim I asked if they had any other colors in my size.  When she brought these out, in my favorite color combination of all time, it was like a sign from the heavens–“Rae, these are your shoes.  Take them and run.” 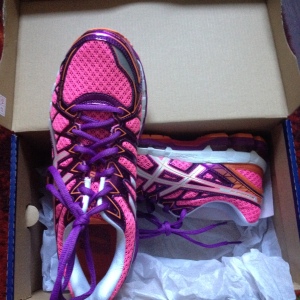 I simply cannot wait to go do my run tonight.  I’m gonna hit the gym for a quick interval workout before going to our friends Aimee and Andrew’s house for the evening.  We’re gonna make cauliflower crust pizza (hello healthy!) and play Wii.  Mario Kart 4 lyfe!

What are your favorite running shoes?

Do you ever play video games?