I know these pregnancy posts are coming at you way after the fact, but having waited so long to make our pregnancy internet official and then being so busy with moving/house stuff, it is what it is. Enjoy! And if you’re not interested in pregnancy posts, please come back another day 🙂

Symptoms
I was one of those lucky few women who did not spend her entire first trimester praying to the porcelain god. I dealt with varying degrees of nausea all day, every day for a few weeks, and even retched once after taking a whiff of something pungent that my in-laws cooked up, but I never threw up! This was such a relief, as I have a mild phobia of vomiting.

What I did have, though, is some next-level hormonal acne. Jesus, I thought it was bad when I was a teenager, but this was something else. My entire forehead was covered in red bumps and whiteheads, and I even got some cystic acne, which I’d never really had before. It was awful. And because I’m pregnant, the products I could use to combat said acne are somewhat limited, so I basically just had to suffer. Thankfully, right around 16 weeks, the acne cleared up.

I’ve also experienced a few less terrible symptoms like mild cramping and sore boobs. And of course, I was tired pretty much all the time. There were a lot of 9 pm bedtimes those first few months.

Fitness
In general I found that any physical activity helped keep nausea at bay and helped improve my energy levels, but it was really hard to make myself do it when I was just so damn lethargic! Most days all I wanted to do after work was go home, change into comfy pants, and vegetate. That said, I tried to force myself into some kind of activity a couple of times a week.

I was fortunately able to continue going to CrossFit through my first trimester. I talked it over with my midwives and they agreed that as long as I listen to my body and scale as needed, I’m good to go. My CrossFit coaches were actually among the very first people I told, and they’ve been great about offering modifications and scaling options to keep me and the baby safe. In fact, they are pretty damn aggressive about offering modifications, and checking in before and after WODs. I haven’t gone that much because I’ve been so tired, but the times I do go feel great. I did, however, switch my membership from 12 classes a month to a 10 class punch card. I just haven’t been going enough to justify $165 a month.

I ran a few times early in the first trimester, but low energy levels, cold, and darkness meant I didn’t do it a lot. I ended up rejoining my fancy gym (I get an amazing corporate discount through work), so that a) I have treadmill access for the winter, and b) when/if CrossFit becomes too much, I can take classes/work out there.

Cravings/Aversions
I haven’t really had any true cravings or aversions, but I will say that what I feel like eating at any given time is completely random. One day something is delicious, the next I’d rather starve than eat it. Then the next day I like it again. I guess the one thing I’m noticing is that I don’t really want sweet stuff that much. Pre-pregnancy I would have at least one sugary treat per day, but entire days go by without even thinking of treats. Savory foods are much more my jam.

Weight Gain
I’m trying really hard not to stress too much about weight gain during pregnancy, but it’s hard. My midwives want me to gain about 25 pounds, which would put me uncomfortably close to 200 pounds. I know I need to gain weight for the baby, but those numbers freak me out. I’m just doing my best to eat as normally and healthfully as possible. There is no “eating for two” mentality for me. At my 12 week appointment, I’d only gained 2 pounds, which is right on track.

Weird Stuff
Something very interesting that happened is that early in my pregnancy, my ocular migraines became MUCH more frequent. The weekend of our Toronto trip, I had one every single day, and I had several more throughout the course of the first trimester.

I talked to the midwives about it, and they said that sometimes pregnancy just makes other conditions worse. I never really got an answer as to what was causing my migraines, and they were so infrequent I just didn’t worry about it. The midwives assured me that there’s no danger to me or the baby, and it’s probably just “one of those things” that will go away after the baby is born. I haven’t had one since my second trimester started, so I’m gonna cross my fingers that I don’t have to deal with them anymore. 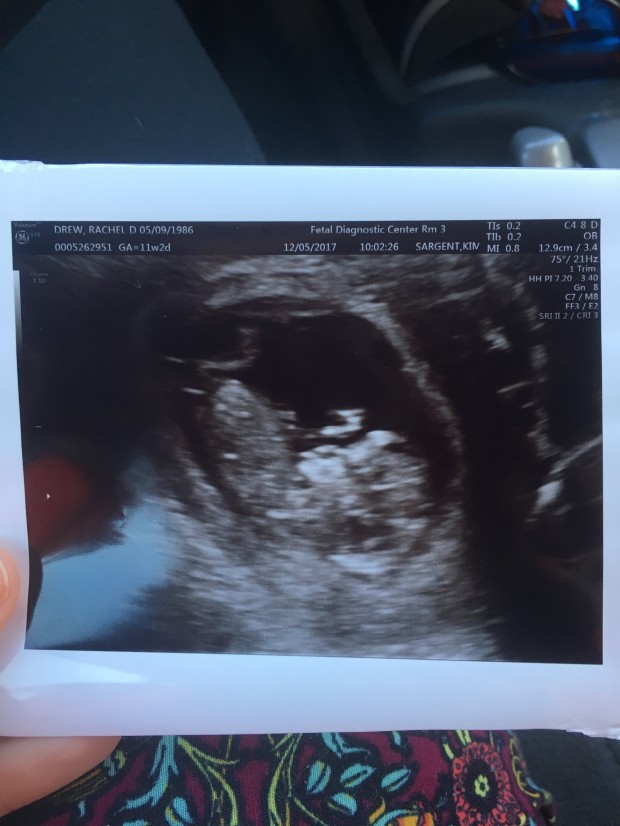 I have a distinct lack of photos of me from the first trimester, but here’s an ultrasound!

Let’s just cut to the chase, shall we?

SURPRISE! You thought this was just a (spectacularly late) 2018 goals/resolutions post, didn’t you?

I’m betting that many of you may have already suspected this news based on my plethora of early bedtimes, the greatly reduced workout schedule, and the lack of alcohol references around here lately (this was also a dead giveaway to many friends and relatives!), but it was time to officially let the cat out of the bag.

I waited a long time to do any social media announcements for many reasons. First and foremost is the fact that I’m not planning to come back to work after the baby is born. I wanted to chose the time and manner of revealing my pregnancy and plans to my bosses very carefully. I am “friends” on Facebook and Instagram with a number of my colleagues, and I didn’t want the news to work its way through the grapevine. Thankfully, my bosses are very supportive of my decision, and I’m working with them to ensure business continuity after I leave.

Secondly, I was enjoying just being myself. Once people know you’re pregnant, it seems like that’s all anyone wants to talk about anymore, like it’s the only way people know how to relate to you. People start calling you “mama” and begin giving you all kinds of unsolicited advice and EVERYTHING is about the baby; you kind of lose your sense of self. I’ve already been feeling that with some of my friends and family, so it was nice to just be “Rae” to the online world for a while longer.

The last reason I was reluctant to share is that being pregnant is just plain terrifying. Joyful and exciting, yes, but also terrifying. Every second of every day I worry about that little baby in there. Any lessening or changing of pregnancy symptoms causes me to worry there might be something wrong. I didn’t start showing until pretty late and was worried that the baby wasn’t growing. Waiting for genetic testing results was excruciating. I haven’t definitively felt the baby move yet, which makes me nervous even though it’s totally normal. I was scared to share the good news and then possibly have to share bad news too if something happened. However, we had our big 20 week ultrasound and anatomy scan last night and everything looks great, so I finally felt comfortable sharing with a larger circle. It’s been REALLY hard keeping this secret from all of you, and I’m glad to finally be able to share!

There will likely be a lot of pregnancy posts around here going forward, but I don’t intend for this to become a “mommy blog.” This blog has always been a place to share what’s going on in my life, and my pregnancy and child will obviously feature largely in my life going forward. And of course I plan to continue sharing fitness adventures, particularly because staying active while pregnant/momming can be so challenging.

Before closing, I’d just like to briefly recognize that we are so, so fortunate that we succeeded in getting pregnant so quickly and easily. I know this is not the case for so many couples who want children, and my heart goes out to all those in the TTC community.